Incorporating indigenous ways of knowing and being into my classroom

Friday was the first day of the new semester. While there was excitement in the air, it was a different kind of feeling than the first day of September. The grade nines are now settled into their routine and the grade twelves can see the proverbial light at the end of the tunnel. For me, it is an opportunity to restart, to try new ideas, and to engage with new faces and personalities.

One of the paths that I have been on for a long time, although it has become clearer in the last six months, is opening myself to becoming (more) comfortable with introducing indigenous ways of knowing and being into my classroom practice. I have had some strong guides in the journey in the last few months – Gail Higginbottom, Paul Lacerte,  Suzanne Wilkinson, Bradley Dick, Jarrett Martineau, and most recently Corrine Michel – all of whom have generously shared stories, space and time with me, while answering my honest questions honestly.

The turning point of my journey occurred this past November when I was able to travel to New York City and be a part of the Hip Hop Education Think Tank III at the Schomburg Center in Harlem. That weekend was profound in many ways, but the one way that has resided in my mind and soul the longest was that hip hop culture (note: commercial rap has nothing to do with true hip hop culture) is an indigenous culture. There is so much to be written about that statement, but suffice it for now to suggest that this concept should be intuitive when we trace the origins of hip hop back to the African diaspora and the spreading of indigenous west African cultures around the world. However, it was spending time with Jarrett that weekend, who continued to build upon much of what was being told to me by Nostic, my co-educator for the Contemporary English: Hip Hop class we teach, that this idea crystallized. Once I could recognize that hip hop culture was indigenous, and therefore it was human, everything seemed to make sense to me. The incorporation of indigenous ways of knowing and being into the classroom wasn't about trying to teach people about indigenous ways of being; it was about teaching people about human ways of being.

For too long, I have felt that the incorporation of indigenous ways of knowing and being into traditional classrooms has been through cut-aways in textbooks; a highlight of sorts about a certain ceremony with an accompanying picture (like the one below, portraying a Cree Sun Dance), to give our students insight into the way our indigenous people lived their life. In speaking about this image last semester with a student who is Cree, she shared with me how she felt alienated both by the textbook and by the (lack of) understanding people gained from it. Her experience is this reason that I have been looking to authentically incorporate indigenous practices, which is to say human practices, into my classroom; moving away from the hyperbolized and decontextualized ideas that are imparted in isolated photos like the one below. 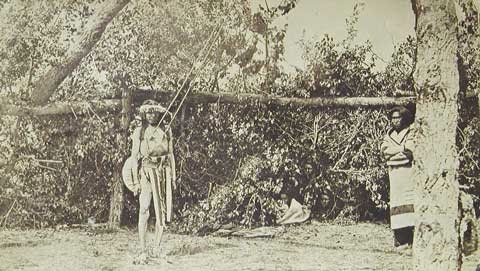 I am fortunate to be currently enrolled in a course through Camosun College entitled TELTIN TTE WILNEW (Understanding Indigenous People), and it was after our orientation with Corrine Michel that I felt comfortable enough to begin the three high school courses I am teaching this semester with Circles. I had, up until Friday, shied away from using indigenous practices in my classroom out of respect for the cultures from whom I would be borrowing these practices; I was fearful I would not perform them correctly nor have the support of the indigenous community to use them. My guides on this journey have helped to allay those fears and so, I tried Circles to begin my semester, attempting to authentically incorporate indigenous practice into a classroom where the very high majority of students are non-aborginal.

It was wonderful. It was awkward. It was beautiful. It was slow. It was peaceful.

The students were very open to this way of beginning a semester. I did not hand out a syllabus. I did not hand out a list of rules. I did not try to scare, coerce, or intimidate them with threat of marks, calls home, or taking away their devices. I was as honest as I have ever been with students about my journey and my newness to this practice. And because of the sharing that occurred in our Circles, we spoke about community, equality, support, infinity, life, vulnerability, inclusion, beliefs, health, hierarchy, connection, and more. I posed the question to my students, "Would you like to be in a classroom that was described using those words?" I then asked them what they thought the purpose of school was before showing them the following video.


We only had an hour together on this day, so I left them with the question "What do you want your semester in English to look like?" I look forward to their answers...and uncovering my own.