The drive across Ironworkers' Bridge at 4:00am.
The morning started out beautiful.  The drive across the bridge at 4:20am was serene and the sky was starting to move from black to blue.  The silhouettes of the mountains I was about to traverse was actually inspiring, not frightening.  Everything was great and I was on time. 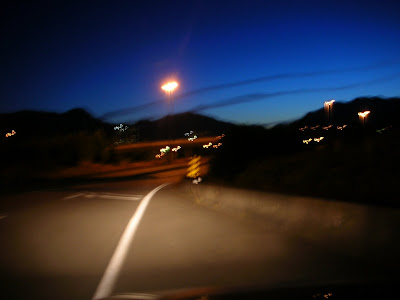 The mountains are just silhouettes, waiting to be crossed.
But only after I pulled into Lina's driveway to pick her up before making our way to the shuttle bus, did I realize that I had left my water bottle at home.  For all my planning and attention to detail, I had left my full water bottle on the counter.   Luckily, Lina had an extra one for me and everything was fine.  For the moment.
The bus ride across to the start was great, but there is always something humbling about driving the length of the race you are about to running.  When it takes 30 minutes along the highway to get to the start, you begin to wonder what it is you have signed up for.  However, the idea of point-to-point races is much more appealing than a big loop as there is a sense that you have travelled under your own power. 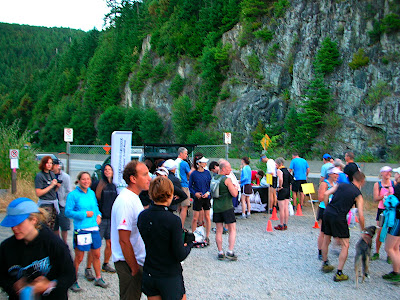 Milling about at the start.  Notice the eagerness of Lina and Tom
(blue jacket and hoodie off to the left looking at the
camera - both were to have great days!).
The start was good.  Saw a number of friends and everyone was in good spirits, especially since it was before 6:00am.  I did a short warm-up (by short, I mean 3-4 minutes - more running to go pee than anything else).  And before we knew it, we were off. 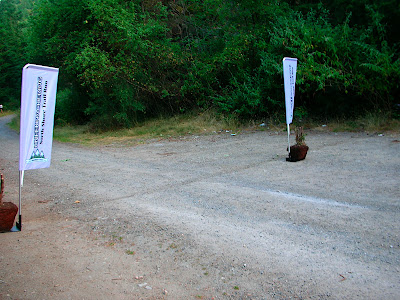 Yes, the race begins with a litteral line drawn in the sand.  For the Lebowski fans, as Walter Sobchak said,
"...it's about drawing a line the sand, beyond this line you do not...and dude,..."
It was my intention to run this race more as an adventure than a race, so accordingly I took it out very slowly, trying to keep my heart rate quite low.  This worked well, but also put me quite far back in the pack.  I wasn't too worried as I kept reminding myself that there were 6 hours left.  So, while I was being very conservative, I was not able to shed race mentality.  But, more than any race I have ever done before, I ran within myself. 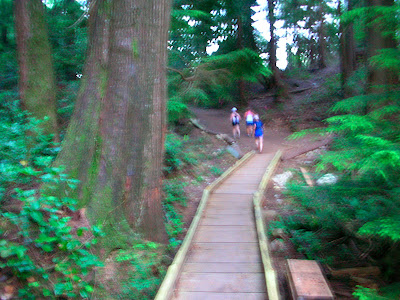 The first few km are AMAZING trail, and it is easy to get caught up "racing" at this point.  I was pleased that I didn't.
The first climb was about a 1:20 long.  There was a boulder field and some beautiful views.  Lots of scrambling and very little running.  I was content to hike/climb as there wasn't a lot of time to be lost going uphill, but there is lots of time to be made up going downhill. 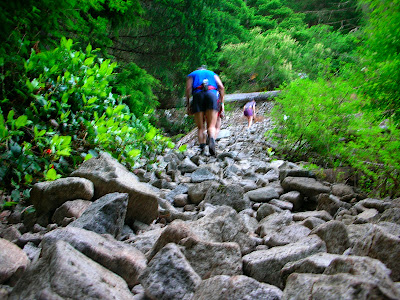 This is why "racing" at the start may not be a good idea. 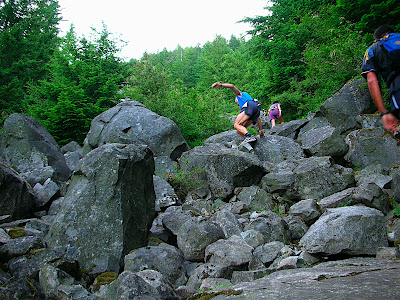 The beginning of the boulder field.  I loved my Brooks Cascadias on this rock.
We crested the first peak and went through the aid station (they are heroes for being on the top of a mountain with water and ju-jubes!). 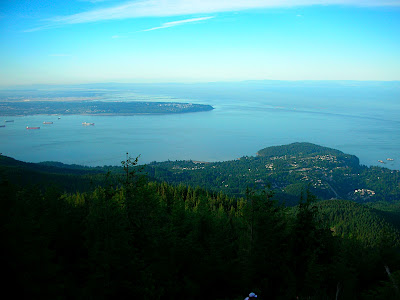 Almost at the top of the boulder field.  That is West Vancouver in the foreground and Stanley Park across the inlet. 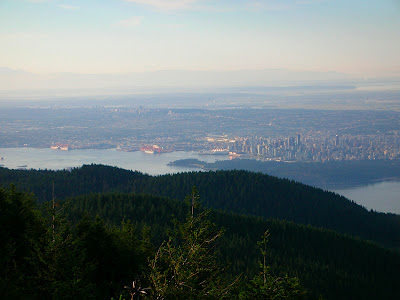 The top of the boulder field, with downtown now in full morning view.
Running through some snow and by a mountain top lake, I began the descent into Cypress Bowl. 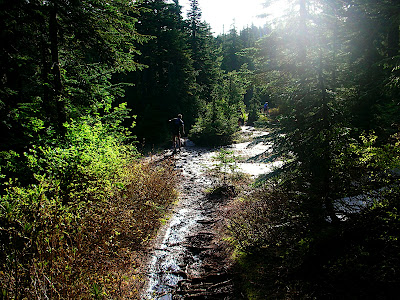 The melted snow revealed lots of mud.  Who knew I would wish for more snow? 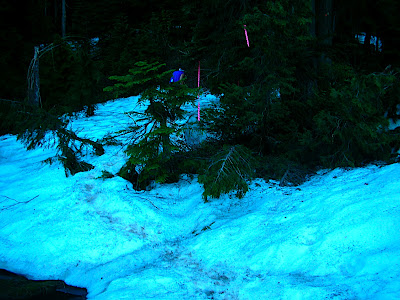 The tint is off, but the snow was welcomed!
The run-out was actually quite easy as it is part of a ski hill, so very well maintained (unlike the climb that we had just finished).  I went through the aid station, found out that my friend Tom was only a couple of minuted ahead (thanks to his girlfriend Lara), and was excited to really get into the race now that the worst climb was over.
The downhill was technical and fun.  I was really proud of myself for committing to and maintaining a low heart rate throughout the first part of the race.  This is often my downfall, going too hard too early, and now, 2:20 into the race, I was feeling better than I ever had that far into a run before.
The downhill was laid out before me and I was eager.  This was my strength and I knew the second half of the course very well.  I was starting to think about a negative split for the day, which would be great and place me well within the top 10, not bad for "not racing".
But this was not to be.  About 10-15 minutes from Cleveland Dam, which was a mile before the first of the five road crossings leading into Cleveland Dam, I rolled over on my right foot.  Hearing a snap, which I thought (hoped) was a twig, I continued to run as often a twisted ankle isn't bad.  The initial shock wears off and you can run on it no problem.  In fact, that exact scenario had happened not five minutes earlier with my left ankle.  The pain was not in my ankle, but rather in my foot.  After 500m of running, I knew my day was done.  It was increasingly painful to bear weight.  I skip-hopped, much like Terry Fox, and made my way out to the first of the aforementioned road crossings.  There was a king marshall there and the call was made to Search and Rescue to come take a look at my foot. 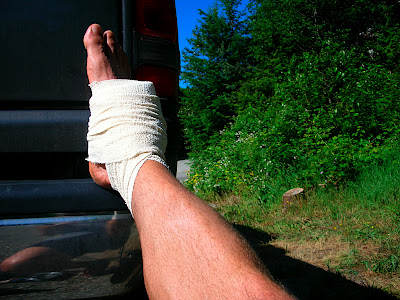 And my day was now about waiting.
"Yeah, I am here with the runner who has a sore foot."  I could have killed that woman for Search and Rescue.  Sore foot?  I didn't know how what the extent of my injury was at that point, but sure as hell it was than sore.  "Sorry, we are not allowed to transport people or else I would drive you back to your car."  I mean, I know Search and Rescue do amazing work, but maybe I was too tame for them.  She did give me an ice-pack, which was needed, but I was left to wait for a volunteer to come drive me to the finish so I could retrieve my car and head to the hospital.
Sparing the details of getting the X-ray, I ended up in ER with a kind doctor who showed me where the fracture was in my right foot.  "A nondisplaced fracture of your fifth metatarsal."  This basically means that the fracture is aligned well and should heal fine.  It is a bone on the outside of the foot (think baby toe), about an three inches forward from the heel.  The average recovery is 8-10 weeks, and usually it is a full recovery.  This is the good news.  The bad news is that there is next to no chance for the ENDURrun.  I was really looking forward to that race this year - it was to be the highlight of my running season.  I am going to aggressively rehab the bone - which is to say that I am going to do everything I can to give my body what it needs to rebuild the bone because there is not much rehab you can do for a broken bone.  I have to get the OK to get into the pool and start swimming and/or water running in an attempt to not lose too much fitness.  I can't do too much, but I will do what I can.
I have had a ton of close calls in the trails.  Whether it is a fall, a twisted ankle, or a near-miss, I have avoided my share of injuries.  This is the first bone I have broken.  I guess my number finally came up.  Simon Driver put it into perspective for me; "If you are going to break your foot, best to do it on a day when there are 200 volunteers looking to help you."  This could be much much worse.  I will refocus my training for the next couple of months, and come out of this with a fire that will help me train throughout the winter.
at 5:00 PM

Tough luck Brad. You were cruising along so nicely and got sideswiped like that. Take care of that foot and recover well.