Two races in two days.  I love the Hallow's Eve race, not only because it is a beautiful course, but because the costumes are pretty amazing.  I am not one for dressing up - I went as a runner - but I appreciate those who do find the time and inspiration to do so.  Kudos to the Harry Potter look-alike!
Last year I ran the Half-Marathon portion of this event, but this year I chose to race the 10k.  I haven't run more than 15k yet in training and the incredible number of stairs in the Half would knock me on my butt.  As it turned out, the stairs in the 10k version did that - I can't imagine what I would have felt doing more than double in the Half.
The race started out in perfect conditions.  Just like yesterday, the air was crisp and you felt fall in the air.  The course winds through Lower Seymour Conservation Area, which is my running backyard, so it was wonderful to be back in the trails for the first time since July.  I felt a little frisky at the beginning of the race, so on the uphill run to the trails I put in a surge and tried to gap the group of five at the front.  With the big boys running the Half, I didn't know who was in the 10k, but since I felt good I pushed it a little.  Into the trails I had a little lead, but it wasn't long until one of the group crossed the gap and was with me.  I thought that this would be good because it would keep me focussed and it is always fun to race.
I had forgotten that it is fun to race when there aren't hundreds of stairs in your race.  As we hit the stair portion of the course, the guy behind me was all of a sudden in front of me and running away.  I was starting to go lactic as a result of my push early on and was losing contact quickly.  Fortunately, the now first place runner made a wrong turn which cost him about 15 seconds, putting me back in contact.  Unfortunately, there was another set of stairs immediately in front of us, and that would be the last I would see of him until he was standing on the street corner cheering me into the finish.
I know that I don't have the endurance needed to really compete yet; however, being reminded of that in a middle of a race isn't always fun.  Having said that, this race was fun and it served as a motivator to get in some more base and hills.  My time was faster than last year's winner, so that was a good a consolation.  Also, it was great to be with the trail running community again.  And IronLung always puts on a good race, so it was a wonderful way to spend a fall morning.  Onwards and upwards - the hills that is.  This winter will definitely be spent doing that!
at 12:45 PM 1 comment: Links to this post

Sonja's Day at BC Cross Country

What follows are pictures from Sonja's afternoon at the BC Cross Country Championships.  I ran well and finished where I thought I would.  I am pleased with the effort, especially since it was the  longest race I have done in my return to running.  Enjoy the best of Stanley Park in October.... 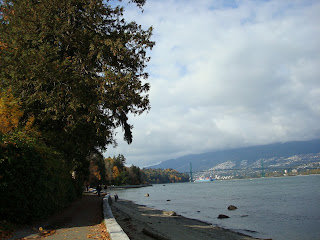 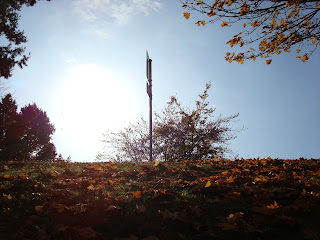 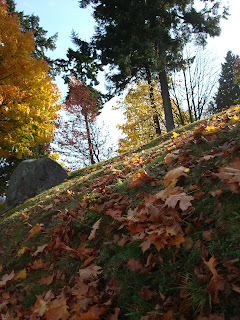 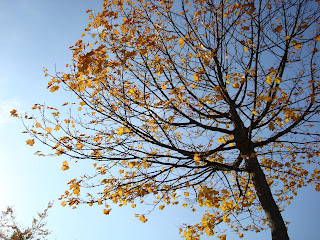 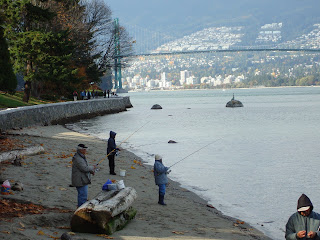 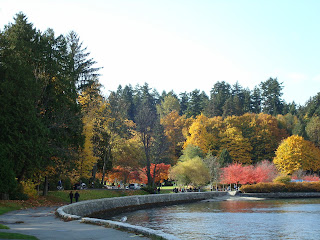 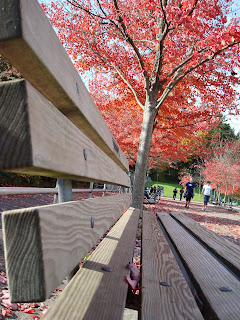 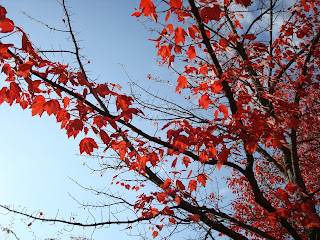 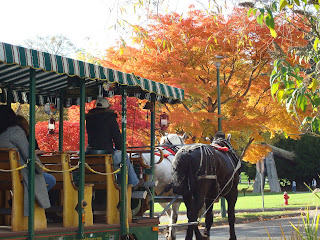 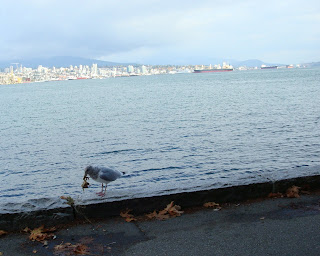 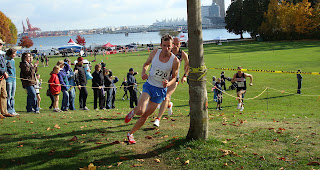 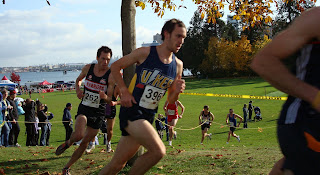 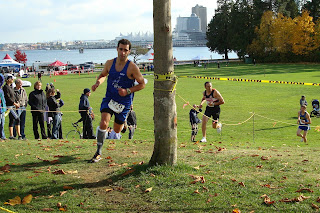 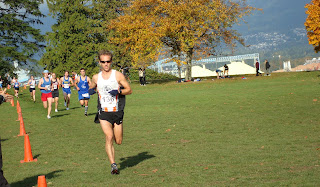 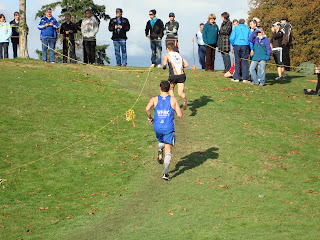 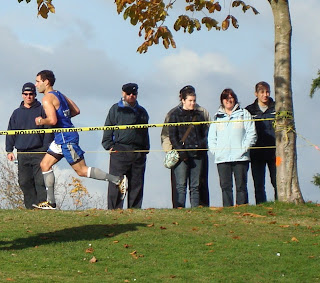 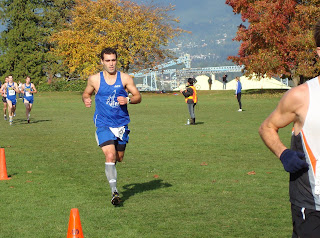 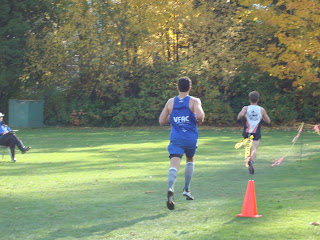 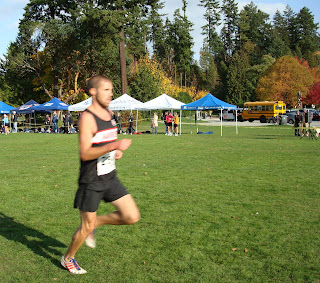 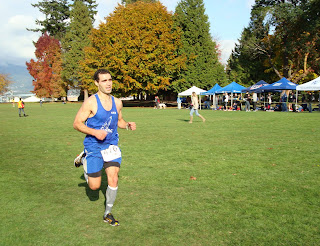 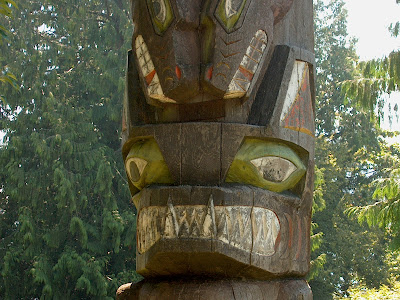 The Totem Pole at Cates Park in North Vancouver (Photo Credit - http://tjguy98.blogspot.com)
6.3k of cross country bliss today at the Frank Reynolds Memorial Cross Country race at Cates Park in North Vancouver.  It was a good race for me as I felt strong throughout, building throughout the first lap, being conservative during the second lap and pushing throughout the third and final lap.  Not a blistering fast time, but a solid effort coming off the 2 x 3 miles workout on Thursday.
The day was perfect, what fall should be like for everyone everywhere.  Crisp, clean air and coloured leaves, just enough dotting the ground to remind us that we are approaching the end of a cycle.  I ran into Mike Murphy again with whom I am quickly becoming cross country friends.
The race went out quite quickly with a number of the young bucks who were only doing two laps racing to the front.  There were also two Open Men up there as well (and by up there I mean 100m out in front after 800m).  I wasn't sure of anyone there, so I worked my way slowly up to the front, jostling and being jostled through the twists of the curvy course.  It was a great course and a lot of fun with enough variation to make each of the three laps enjoyable.  By about 5 minutes in I was back up to fourth, but that quickly became third as we passed by one of the leaders who had twisted his foot while navigating the root-filled single track section.  Unfortunate break for him as he seemed to be going well.  The other guy with him was no longer visible, so I sat on the shoulder of the second place runner for as we finished the first lap and started the second.  My pace had slowed as I ran on his shoulder, so after taking a little break, I made a move on the uphill and pushed the subsequent downhill to create a gap.  The fact that Sonja was sitting on a rock watching my on that uphill might have a had a little bit to do with my decision to throw in a surge.
Having created a bit of a gap, I decided to not work too hard on the rest of the lap, instead waiting for the third lap to turn the screws a little more.  The third lap passed much as the second, but with me running more of a time trial, unsure of whether the person in front of me was (he was that far ahead).  I passed Sonja again, making sure that there was no snot on my face so as not to gross her out too much and dissuade her from attending any more of my races.
I finished second on the day and ran a 22:22; I am beginning to get a knack for these double numbers after my 27:27 last weekend.  Maybe my Gunner Shaw will be a 31:31?  Turns out that the guy who won the race is Norm Tinkham, he of the 1:10 and 4th place  in the half marathon last weekend.  That would be a reasonable explanation as to why I didn't see him at all during the race.  However, I felt good on the course, my foot felt strong and my lungs are beginning to catch up to my legs.  A good day.  Tomorrow I hope to be in the trails a little bit, but I'll see how everything feels in the morning.
PS.  If you don't have the new Macbook, you really need to get it.  It is a little piece of amazing.
at 4:10 PM 1 comment: Links to this post

Coming to you from somewhere new....

Yes, at this time, I am writing to you from my new Macbook.  I went to the Vancouver Apple Store tonight to get it, but the one I was going to buy was sold out by the time I arrived.   Ten minutes before I arrived to be exact.  I wanted to get the 2.4 ghz Macbook, but had been waffling over it as the only true advantage was the backlit keyboard, which I don't think that I would ever really need.  There is a larger hard drive and slightly faster processor, but I can upgrade the hard drive later and the processor won't make a difference for what I use the computer for.  So, after sucking it up, I got the more inexpensive version and I am happy for that.  It was the smarter, but not as sexy, choice.  So, I am writing to you from the new Macbook and I am happy.
Oh yeah, the 8k went well.  My shoe came untied - rookie mistake.  I raced in new flats without trying them first (they are little small) - rookie mistake.  But the race went well and I ended up running 27:27, mostly to impress Sonja's parents who were there for the race.  I pushed hard but didn't dig deep.  I am pleased with the race and the result.  Tonight's VFAC workout was 2 x 3 miles along the seawall in the dark and rain.  I went 16:26 on the first (with the wind) and 17:05 on the second.  I was on my own the whole time and was not very motivated as there was a new Macbook in my trunk I wanted to get home to play with it.  Things are coming along nicely and I am looking forward to getting back into the trails this weekend.  I am also going to race a cross country race on Sunday - good times!
at 11:06 PM 3 comments: Links to this post

As in short, not as in underpants (although I just picked up some new Icebreaker merino wool ones - fantastic, let me tell you!).
Running has been going well.  I did not race this past weekend as I was in Whistler with Sonja and her parents.  It was a relaxing weekend, and gave me a little rest from the race circuit.  However, the VFAC workout on last Thursday was encouraging.  It was 4 miles followed by 2 x 1 mile.  I held about 3:30/km on the 4 miles and then the mile repeats were 5:06 and 5:02 along the seawall in the first moments of night.  The workout felt good and Coach John was pleased, but when I got home and looked at the times in comparison to times from earlier this year, I wasn't as encouraged.  However, that is my being unrealistic and wanting to be ahead of where I am.  It is good for me to remind myself at moments like this to be patient and not look at any of the races happening in the next few weeks, but in February and March.
In the recovery portion of the blog post I get to say that the foot is about 97% pain free.  I feel very small twinges every so often, but never anything that I would term "pain".  I will start to introduce runs on back to back days next week, three months after the fracture occurred.  That is something I must remind myself - I am only three months removed from sitting on the side of a road watching people run by me as my foot rested on the back bumper of a Ford F150.  To be running 5 minute miles in a workout ain't that bad.
This weekend is the Royal Victoria 8k.  Having done their marathon twice and the half-marathon four times, this will be a drop down in distance for me during this weekend running extravaganza.  I have not done the 8k before and I am looking forward to it, especially after learning that Liam will be competing in it as well.  I am not sure of what time to expect, but if I am around 28 minutes, I will be pleased.  27:30 would be amazing, but I am getting ahead of myself in thinking about that time.  Patience, young grasshopper.
at 5:32 PM 2 comments: Links to this post