I am taking full advantage of Kate and Stefan Timms' broadband internet. I have added pictures to the Stage 3 post as well as putting tons onto this one. You may never want to see another Brad running picture again after this post.

So, the day begins without an alarm and slight sleep in. I woke up feeling good after the ice bath and massage the day before. Darren and Krista bought a new car the night before, and have graciously offered to loan it to me for the duration of my ENDURrun. Before the ink had signed on the car deal the minivan was returned. I got a ride back from the car rental place and spent the afternoon napping.

This is a good moment to mention how incredible baby Mark and baby Luke are. They are HUGE babies and they are the happiest, most well mannered babies I have ever met. They sleep like, well, babies, and I have not heard them cry yet (except when they get their legs wedged in their crib). They out napped me on this day, but I put a good 90 minutes in.

Last year, after a tough 30k, I came back and felt great on the 10 miler and ended up winning the stage. That wouldn't happen this year as Steve Drew, a relay team runner, ran 54:00 minutes on a very hilly 10 mile course (I believe that works out to 3:21/km) - an impressive run on that night.

I packed my bags in preparation to go to Toronto with Kate and Stefan after the race and, after the babysitter had arrived to take care of the incredible twins, we were off. We reached the race start and everything went normally. A little warm up (they are getting shorter) and then we walked to the start line. The start of this race is on an uphill. The finish is also on an uphill. Lloyd is not very kind.

10 of us started, and Stefan, arriving late due to traffic in Toronto and heading into Kitchener, started about 10 minutes behind the rest of the field. Ken, our Canadian Moutain Runner, had come back for another round, so it was "On Your Mark" and we were off. Steve was out like a bullet, and I actually laughed at one point because he had put so much distance between himself and the rest of us so quickly. Ken pulled ahead and Bob and I settled in. A slower first kilometer (partly due to a hill and partly due to warming up still) let us ease into the race. The first few kilometers were relatively flat and on paved road. Bob sat on my shoulder as we ran this part the race, both of us acutely aware that the hills were going to be where the race started. We hung a left onto the dirt road and the fun began. 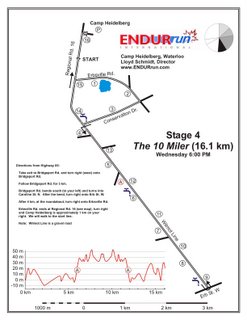 I knew the course, and while the hills were big, they weren't overly steep. As we hit the dirt road I started to dial into a more steady pace. Through 5k, we split 19:22 and then we hit the big hill, slowing us to a 4:10km. I felt good up the hill and focussed on running over the hill (as I have told my clinic athletes so many times). The course was rolling out toward the turnaround and I felt strong on the hills and smooth over them. Our splits varied from 3:55 to 3:30 depending on whether we were going up or downhill. As we rounded the turnaround (which was at about 9.5k into the run) the pace continued to increase, all my fault as I was leading us. We split 10k in 38:34 and began to straight road back to the finish. 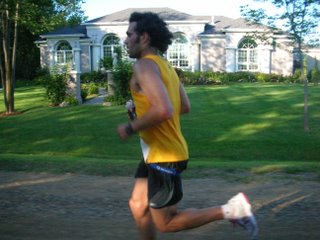 In the middle of a surge

I had put in a push to try to create a gap with Bob, but to his credit he is a strong downhill runner and closed the 10 meters I had opened up on the downhill (and I was running the downhill well). 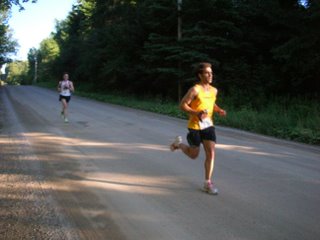 Putting some distance between us, but not for long
As Bob pulled up beside me I decided to let him set the pace for a little while. I had done my part and he stayed with me, so I eased up and settled in on his shoulder. We ran together for the next few kilometers, neither of us getting a lead. 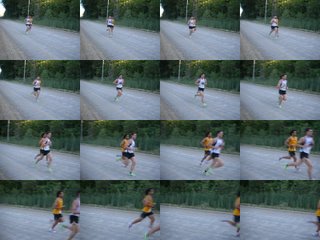 Bob and I running together one of the last downhills 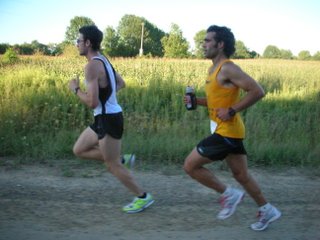 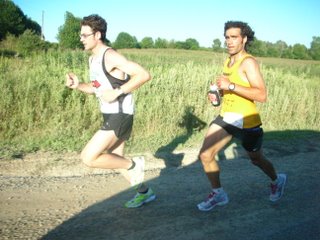 Thoughts of yesterday started to swirl in my head. I began to determine what I was willing to put out for the finish. Like yesterday, the finish was on a uphill, but a decidedly longer and harder hill. The pace began to pick up as we crested the penultimate (second-to-last) hill and descended to the beginning of the final climb to the finish. I decided that at this point, Bob would have to run a 3:10 final kilometer to put 20 seconds into me, so I would stay steady and not try to engage in another sprint finish. 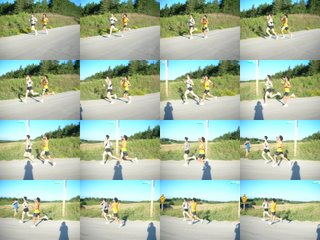 Bob pushed the pace on the last hill and began to separate from me. I put in a little surge, but then settled into a steady climb. I swallowed my ego and ran in strong, watching Bob take some time out of the lead that I had. In the end, Bob finished 12 seconds ahead of me, reducing the lead to 1:27. I felt good finishing, although it was a tough final 6k. Is it wrong that 10 miles is beginning to feel short?

After a cool down and a treatment I went out for dinner with Kate, Stefan, Darren, and Krista. It was a nice dinner, but great company. It is always so easy with old friends, to fall right back into a rhythm. All through dinner I felt very good about the run. Lloyd mentioned to me that I had run faster than my time last year, which was very inspiring to me. Bob had run a great race and it was fun to actually race with him. I am enjoying his company on the runs and hope that we both are able to complete the ENDURrun to the best of our abilities.

Kate and Stefan chauffered me back to Toronto, where I was able to upload pictures quickly AND had two great recovery sessions. The first was with Dominque Forand, one of the greatest chiropractors in the world! She treated me like king and I walked out feeling very good. But I was still in for more as I saw the massage therapist that Stefan goes to. Mr. Andrew Foster surpassed anything that Stefan had prepared me for - an incredible massage and, overall, an experience that left me peaceful and centered! I am going to see them both again after the marathon in the hope that I will be able to walk of the plane normally.

I am not sure if I have mentioned this yet, but I was going to decide about my fall race after the finish of this event. However, I can say now, with a good degree of certainity, that I will likely be running the Royal Victoria Half-Marathon. I don't see the marathon this Sunday as being an easy jog, and thus I am not sure that I will have sufficient recovery to put out another strong marathon effort only six weeks later. I would like to run a fast half, and I think that I will be able to do that. Things can change, but I am definitely leaning to the more sane distance.

So, it is a 25k hill run tomorrow. I am excited for this race as it is a tough course, but it is fun. 5 loops of a 5k course. Each loop has 2.5 summits of Chicopee Ski Hill. It will be an interesting race and the last real chance for any time change prior to the marathon. 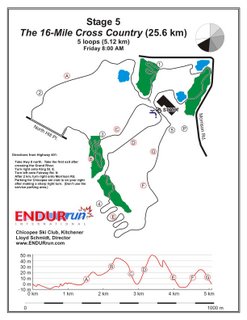 Thanks again for reading. What follows are two pictures of Darren and Krista's place in Cambridge. It is so wonderful. Thought I would share.

Have a great run! 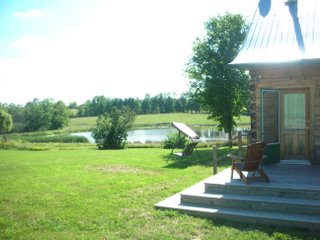 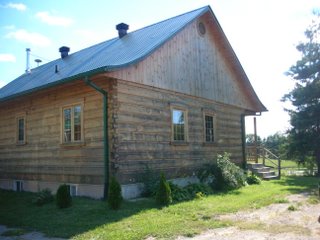 Great run but watch out for that sneaky Bob guy. He sounds like the guy on the Accountemps radio commercial. Have a restorative day off.
B's D
P.S. See post 14, Stage 2

Hi Brad, it is Chris. I was updating my own blog last night, but I don't think i'll have eloquent ones like yours! I was going to give a final kick to catch you guys, but didn't think i could do it as I was a few km's back when you were finishing! ;-)

Keep it up! Enjoy the day of rest. See you on Saturday!

I’ve fully enjoyed reading your posts; I’m living vicariously through you. Keep up with the excellent running and all the best in the next few days.

Warm down – of the two, I find cooling down to be the most important. A warm down is important, and begins the process of loosening up the legs. The minute your race is over, recovery and preparation for the next day begins.

Recovery drink – Have your preferred recovery drink ready to go in a cooler. Bruce has always advocated chocolate milk; I hope you’re not lactose intolerant.

Ice – I love/hate ice baths, it helps reduce swelling which is the major cause of delaying the recovery process.

Hang the legs, drain the lymph node system – it's easy, lying on the floor and putting the legs up against a wall is the best and easiest way!

Great work Brad, Watch Bob though!
I think its just about time to break him like a cricket (sorry Bob).
Southie

Leave Bob alone! He can't help it that he was named after the star of Full House.

Brad, sorry I haven't had time to send that video of myself doing squats in short shorts like you asked. I've had precious little time these past couple of days with my own training (and teaching and editing). I hope you were able to get your fix from somewhere else.

Thanks for the shoe help. My old knees will thank you once I get out and find that pair.

Yeah B-rad!!!! Still ahead...
Hope you enjoyed the much deserved rest day today to re-energize, you deserved it.
Looking forward to reading about the weekend's races. Have fun, and "spank" that Bob in the next three!
We're all cheering for you!
BIG HUG.
jen =)

Yay Brad! Michael read out some of your results at the clinic Wednesday night, and people cheered. Keep kicking ass!

Hey Brad, I was driving to work this morning and I stopped at Terry and gave his foot a rub for you...hope it helps to keep you strong. Go Brad, GO!