Thanks to Tony Austin and Mark Creery for all of this year's fantastic pictures. I don't have a credit for the older one.


Gunner Shaw is a man I never met. According to people and websites, he was a great runner and a great person. The reason I have never met him is that he died at the age of 39 in a car accident. This was in 1984 and I just raced in the 24th Annual Gunner Shaw Memorial Cross Country race in Victoria. This is the first of two Gunner Shaw Cross Country races I will be racing this year - the second being at Jericho Beach in Vancouver next weekend.

The Victoria version (Part One) is my favourite race of the year. It is a no frills, bare bones, hang it all out kind of race. There is a "puddle" that we run through and the end of the race is in a lake. This is the race that turned me on to trail racing. For time immemorial, if it is humanly possible for me to be at this race, I will. 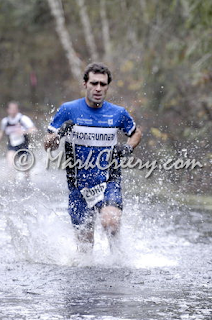 The "Puddle" this year 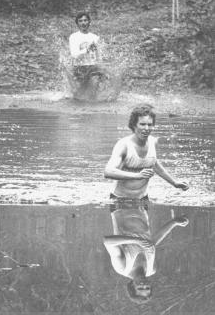 The "Puddle" in years past. That is Frontrunners owner Rob Reid leading the Gunner Shaw.
Yesterday saw perfect running conditions. That meant it was terrible Gunner Shaw conditions. Bob Reid, the race director, cringes if it is not raining, 0 degrees, with the "puddle" navel-deep and covered with ice (for example - last year saw "perfect" Gunner Shaw conditions). The "sissies" edition this year may be a reason that there were over 500 registered participants, making this the largest cross country race in Canadian history.

Jim Finlayson and Lucy Smith, two iconic Victoria runners, were the winners of the race in their inaugural runs of the Gunner Shaw. While warming up with Jim, I asked him if he ever trains at Thetis. His response, dead panned, was...

The start of the race saw some yahoos running out front, shirtless and smiling. They would later be crossing the finish line cold and wet and (hopefully) still smiling. After a few hills, approaching the first bridge, the field had sorted itself out and I was a little further forward than I was used to being. This meant that I could still see Jim, Stefan, and Eric, which was definitely a bit surreal. I felt strong, but I wondered how long things would last.

We summited the first true hill of the course and I moved in front of Eric prior to a technical downhill. Coming around the corner to the "puddle" I saw Stefan and Jim about halfway through. 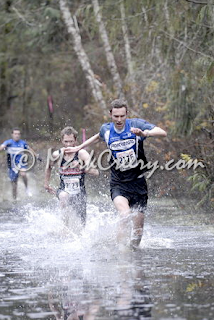 Stefan and Jim breaking the ice for me.

After the puddle, I had pulled up next to Jim but once we could our feel our legs again, Jim decided that he wanted to start running fast, and that was pretty much the last Stefan and I saw of him.

For the rest of the race I talked myself into staying with Stefan. Again, I was unsure of myself, running on the shoulder of Jaker for so long. However, the longer I was there, the more comfortable I felt. I took the lead a couple of times, but realized that I was better off to stay tucked in behind, knowing that Stefan is a much better climber than I am. But I definitely felt Eric catching us a couple of times, so I would try to get Jaker to push the pace a little to make sure we didn't get caught. 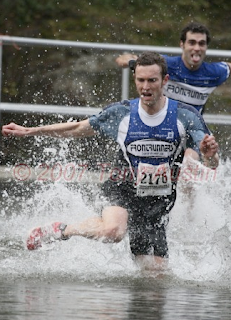 Stefan's crazy legs kept him in front of me.

As we approached the last 800m, there was a good sized hill which Jaker gapped me on and, try as might, I couldn't catch him running through the lake. I ended up 3rd overall, and had a great time in doing so. 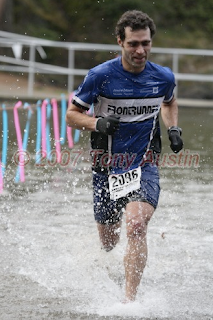 Running with VFAC and John Hill, with guys like Paul, Simon, Jay, and Ynuk has been very beneficial for me as I am learning how to run quickly. The base training from the past couple of years is paying off now as I am layering on some more speed. This is going to be fun winter.

However, the best part of the day was seeing the huge grin on my good friend Jay Bentley as he finished his first Gunner Shaw. He was excited and stoked after the race, even though he was a little tentative about doing the race in the days leading up. He took the start line and had all the requisite war stories about the race afterward. I love seeing how this race affects people!

Stay tuned for Gunner Shaw Part Two as I race in the Vancouver version next weekend.

At some point we will run into each other in Vancouver.

I hope we do run into each other. Let me know if you want to go into the trails one time.

As for Lydiard vs. Daniels, I am going with John Hill's program (the coach of VFAC) which is more Daniels than Lydiard. But I think both approaches are good.