My drive to the north shore trails.
After the rain from yesterday left the coast, the sun and fall air emerged. It was dry in the air, but the trails were still gushing with water. The plan was to run out the Baden Powell trail again this week, toward Deep Cove. This plan didn't even make it out of the car, because as I stepped out to start my run, Mike Medland and Gray Taylor emerged from the trail. As shoe reps that I had worked with during my Frontrunners time, it was great to see them out on the trail. A kind offer for me to join them and we were off. I am not entirely sure where we went, but it was beautiful and fun. 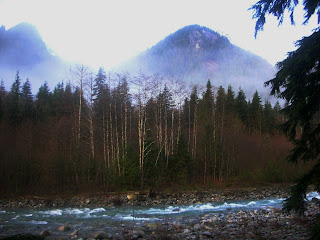 After about an hour together, they dropped me off near the gates of Lynn Creek, leaving me with directions for another hour loop. I continued on my way, discovering some amazing new places. The "Long Loop" was pretty amazing. The first part was quite gnarly - lots of water, roots and rocks. 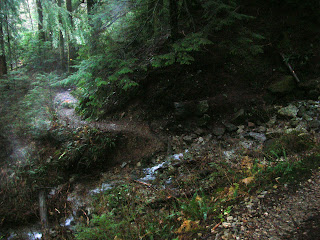 It eventually opened up and was more runnable (I just made a new word) and I cruised back to the Lynn Creek gates. Rather than taking the boring road back to the car, I chose to follow the trails, which I forgot included another 300 stairs. The good part was that I ran into Chris Downie, another VFAC member, and we made plans to run part of the Knee Knacker in two weeks time. Twenty minutes later, I was done my run. A beautiful morning with some random run-ins and two and a half hours of beautiful scenery.
at 2:06 PM